Preamble that illustrates the importance of character, presented in a style like that of an awkward award presenter. Great characters are nature’s onions. Make sure you remove this dummy text … D’OH. Here are some of Screen Scholars’ favorite TV characters for 2018. 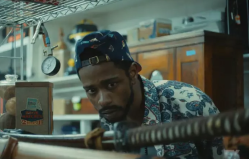 If it weren’t for Darius, I would have no idea the true threat of Florida man. His insightful weed-induced conspiracy theories and philosophies on everything from animal rights to deja vu not only serve as comic relief on the show Atlanta but remind us how wonderfully nuanced people are. Darius is weird but we love that about him. What’s even better is he is allowed to be weird and still be taken seriously, which has not always been the case for POC. Here’s hoping for a new normal.
– Navani Otero 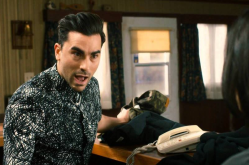 There’s really no individual on television quite like David Rose, except for perhaps Alexis Rose — and part of the genius of Schitt’s Creek is the genuineness of the family, how you can absolutely trace the personality lines from Max and Moira into David and Alexa. David could easily be a jarring and tiresome caricature, but through the four seasons, we’ve seen the growth from querulous slugabed 30-something manchild (and, no, Moira is not writing this) to successful small businessman whose burgeoning relationship with sweet, if fresh to the whole “coming out” thing, Patrick feels so natural that there’s a danger of becoming too emotionally connected — and exhausted — with all its fits and starts. – Jason Thurston 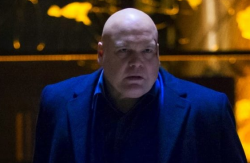 In superhero fiction, the hero is only as good as the villain they are fighting against. Marvel’s Daredevil has one of the best since Heath Ledger taunted Christian Bale’s Batman as The Joker. Wilson Fisk AKA The Kingpin (played by Vincent D’Onofrio) is quiet and slow talking, brooding and ruthless as D’Onofrio manages to ooze menace into every scene. It’s a shame we won’t get to see him in a 4th season. – Brad Filicky 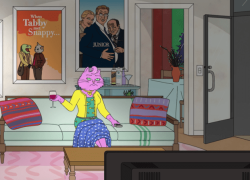 Season 5 brought us both more of Princess Carolyn’s backstory while delivering personal and career successes. While we learned about PC’s motivation (both to make it in Hollywood and to become a mother) we also see her rise into the role of producer. (Which isn’t a stretch, she’s always managing BoJack’s productions, and his behavior, isn’t she?) While we Scholars agree motherhood doesn’t define you, seeing Princess Carolyn meet Untitled Princess Carolyn Project was deeply satisfying — it’s a win after a long series of losses, struggles, and negotiations to stay on top. – Katherine M. Hill

At the end of the day, Joe is a sociopath. He stalks his love interest, manipulates their every interaction and gets rid of anyone in the way of their budding relationship. But because he truly believes he did this all for love there are some people that find all this um, romantic? So much so actor Penn Badgley had to remind us Joe SUCKS. Not sure what this says about toxic masculinity in our society but it’s definitely an important dialogue he is bringing up, albeit unintentionally.
– Navani Otero 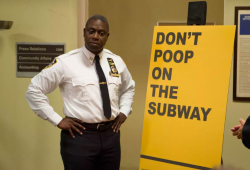 Captain Holt is the ultimate dad boss. This year we have seen him support the squad in all sorts of ways (at Jake and Amy’s wedding, when Rosa comes out as Bisexual). We’ve also had the joy of seeing him fight to move up in his career. I have so loved seeing him fight for a place at the top, speaking out against biased selection committees and refusing to bow down to mafia pressure. He does it all with a dry wit that never fails to make me curl over in laughter. – Fiona Wiedermann

The twisted world of Maniac — itself just a notch off-center with its recognizable NYC subway peppered with roombas and living advertisements which accompanied their targets — was oversaturated with colorful characters, yet Annie Landsberg stood out. Yes, she has the advantage of being brought to life by Academy Award winner Emma Stone, her journey from defiant, closed-off drifter haunted by her sister’s death and father’s retreat into a tech cocoon earns the not-quite-love, yet more-than-platonic, friendship with fellow misfit Owen Milgrem (also a top character candidate played with a uniquely charming sadness by Jonah Hill). Stone is challenged with a constantly changing universe as she disappears into a virtual dreamscape which transforms her from elf to dirtbag to grifter to doublecrossing spy, remaining indubitably Annie in every altered reality. – Jason Thurston

When the much darker Archie & Jughead re-interpretation  premiered a few years ago, Cheryl Blossom was the typical mean girl villain, and actress Madeline Petsch played it with glee and determination. Now, as the show evolves, Cheryl is a rebellious anti-hero and Southside Serpent. She may be an asshole, but now she’s our asshole, out for blood as red as her now iconic leather jacket. – Brad Filicky

Nobody is perfect, we all have flaws– just look at Gretchen. It’s easy to just write her off as a hot mess — and while Gretchen did actually steal someone’s wedding gift, she also bought her battle with mental illness and therapy to the forefront of You’re the Worst. So kudos to her for showing us the ugly truth behind the journey to self-care. It shows us what growth looks like IRL. – Navani Otero 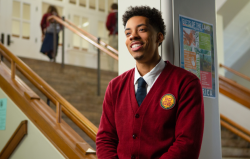 When we first meet DeMarcus Tillman (brilliantly portrayed by newcomer Melvin Gregg), he seems a simple, recognizable archtype: the star basketball recruit and uber-confident BMOC at the hoops-happy St. Bernardine High School, he presents as equal parts natural leader, obnoxious prankster, and master politician; he’s both the most likely to conjure up the Turd Burglar “crime” and the man with the most to lose. However, as his facade begins to crumble, we see how easily manipulated he can be by his less talented friend/hanger-on Lou, how much he craves the approval of the filmmakers, and by the time of his stunning breakdown in a frigid passenger seat, we are brutally reminded of what the golden boy/likely future NBA star has always been — a teenager, just as baffled by how to exist as any 17-year-old. It’s devastating, but it’s also rapturous as he stumbles past this new discovery of self. – Jason Thurston 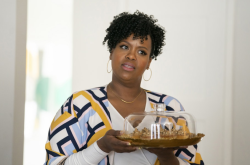 When Issa needs a dose of #adulting reality, Kelli always as her back. We all need that friend that keeps it real with us, even when the hilarious truth might hurt. But not only did Kelli win us over with her comedy, she is also unapologetically her. She is the character that refuses to fall into any tropes as a single or plus-size gal. Her whole existence does not revolve around a man’s validation and her #IDGAF attitude on life is #goals. – Navani Otero