Over the course of three weeks of voting, our field of 64 shows has been narrowed down to an impressive Final Two. You can vote by clicking on the bracket below:

On one side, we have a comedy about an elaborate after-life that in the first season appears to be a case of mistaken identity where a misanthropic snake oil salesman who is accidentally sent to an elaborate and exclusive heaven tailored for the best of the best. But there are cracks in paradise, and it isn’t precisely The Good Place that it seems (the overabundance of frozen yogurt should have been the first clue).

On the other side, it’s the more seemingly conventional story of a guy, a girl, their three kids, and a burger place. However, there’s no three kids like anxious, horse/boy crazy Tina (who some have called the best character on TV), fabulously fluid Gene, and eternally be-bunny-eared and ruthless, yet secretly soulful Louise.

While these are two of the most original programs on television, neither is the first program for the show’s creators. One comes from the co-creator of one of the warmest, most beloved shows of the past decade. The other was conceived by the writer who was one half of one of the most underrated and unique animated half hours in television history, featuring a very familiar voice in more than one role. Let’s take a quick look at the connections between the earlier works of the minds behind our top two shows, selected by you, in our March Madness. 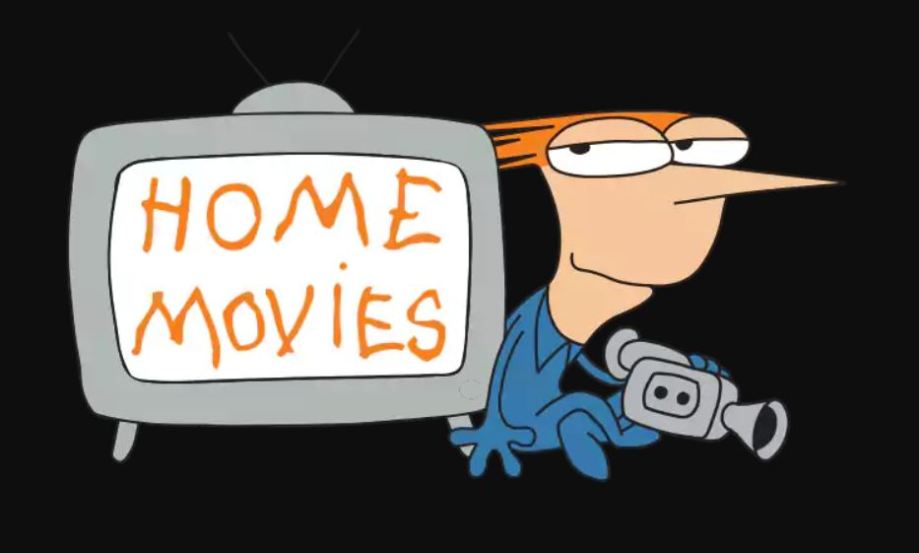 On last night’s Bob’s Burgers, Bob Belcher was roped into being the soccer coach for the Lady Dragons, a team that Bob and his wife Linda drunkenly signed their daughter Louise up for after forgetting their kid’s sarcasm levels border on radioactive. He’s, of course, terrible, and they are a similarly awful team. More importantly, while the show does not lampshade this in any way, the scenario of the voice of H. Jon Benjamin barking out ludicrous orders to inept child athletes on a field (that he doesn’t even know to CALL a “field”) was a delightfully familiar treat for fans of Bob’s Burgers inventor Loren Bouchard’s first creation, Home Movies.

On the brilliantly vulgar show, Benjamin voiced the impishly awful grade school soccer coach Jon McGuirk, a clueless, scheming slob who would constantly have wildly inappropriate conversations with eight-year-old director wannabe Brendan Small (voiced by Bouchard’s co-creator of the same name). Home Movies was initially intended as more of an animated vehicle for established standup Paula Poundstone than an ensemble centered around the cheesy movies of her TV son Brendan and his two pals, Melissa and Jason (the latter also played by Benjamin), the show found its true focus after Poundstone became embroiled in a scandal involving her adopted children. While the scandal proved more smoke than fire, by the time it was resolved, Home Movies had moved on with Brendan’s mom still named Paula, but recast with Janine DiTullio, and the three kids and McGuirk as the center of an expansive universe.

While Home Movies was certainly more raunchy than Bob’s Burgers, it did hint at the delicate balance of sharp humor and genuine warmth, while effortlessly expressing the true love that bound the family together. Moreover, Home Movies shared Bob’s Burgers love of music and musicals and random moments of song and dance. The show’s pivotal episode in its first season was built upon Brendan reluctantly filming his stoner metalhead teen friend Duane’s rock opera about, what else, the life of existentialist Franz Kafka. Its last great episode, season four’s “Bye Bye Greasy” dealt with Brendan’s disastrous attempts to direct the school play–apparently a ridiculous hybrid of “Bye Bye Birdy” and “Grease.”

Home Movies somehow made it to four seasons (it was resurrected from the dead at least twice) between 1999 and 2004 on two networks, one of which does not exist anymore (UPN), and the other Adult Swim in one of its earliest incarnations. While it rarely airs, all 52 episodes are streamable on Hulu.

Ok, as one of the greatest comedies of the last decade, one with a still vocal cult mining every second for quotes and memes, Michael Schur’s previous co-creation Parks & Recreation does not really require any sort of introduction. The show was first announced in 2008 as a The Office (U.S.) spin-off from two of the shows writers, with Aziz Ansari–then mostly known for standup, viral videos, and his MTV sketch show Human Giant–the only actor attached.

While The Good Place earned critical raves and a rabid following almost right out of the gate, when Parks & Rec came on the air in 2009 for its first mini-season, it was less of a runaway hit, and more like a combo trainwreck/tire fire. Amy Poehler’s Leslie Knope was initially presented as a knockoff Michael Scott, displaced from a Pennsylvania paper factory to an Indiana bureaucracy. Knope seemed oafish and the humor cold and while not terrible, not terribly original either.

Then, somewhere around the end of the first season, something magical happened. Schur and his cohort Greg Daniels discovered the heart of Knope’s character when they showed that her awkward hijinks were not those of a buffoonish functionary, but of a visionary who simply cared about her town, Pawnee, and its people at a level most politicians can only aspire. Schur and Daniels also built Pawnee into an expanded universe to rival that of The Simpsons.

Like Parks & Rec, The Good Place has infused its world with a cast of humans who are flawed but who we suspect are inherently good. However, The Good Place surrounds those four humans with actual demons, including actual monsters made of fire (and in flashbacks, Eleanor Shellstrop’s friends and employer are pretty nasty), while outright questioning what it means to be a good person. One of the most interesting features I’ve seen in the past year speculated which Parks & Rec characters would make it through The Good Place‘s purportedly narrowest of narrow doors. My money would be on punching bag G(J,T,L)erry as the only slam dunk, and the sometimes guileless Knope with an outside shot. In any case, there’s a general feeling that Schur’s worldview will always at least want to give people the benefit of the doubt, even the most ridiculous of this world’s creations.

As you probably know, Parks & Recreation can be found on both Hulu and Netflix.