After a week of wild, frantic, unrestrained voting, we begin our weekend with our Final Four, and our brackets make us feel like we’re coming out ahead in the “real” NCAA bracket wars.

The victors this weekend are foud shows deeply beloved by the Screen Scholars team: Bob’s Burgers, Full Frontal with Samantha Bee, The Marvelous Mrs. Maisel, and The Good Place. Three of those shows were on our Top 20, of 2017 and though Full Frontal didn’t make it, Sam Bee and her staff are no less love and adored by our team.

And to think, at least one of us worried the final four would be the bastion of CBS programs.

The Good Place swept its game and defeated Grey’s Anatomy. It now faces The Marvelous Mrs. Maisel, which went head-to-head against Jessica Jones. So, do you prefer your strong, female leads dead in the present day, or alive in the past. Either way, the dames take care of business and make us laugh.

Full Frontal with Samantha Bee, having squashed the competition in Fake News and Late Night, defeated Homeland. (Probably because Samantha Bee is good at her job! Carrie is not.) Now the late-night show with Fake News is facing Bob’s Burgers,  the animated family comedy. While the shows are vastly different they are both deeply committed to comedy and the human spirit. 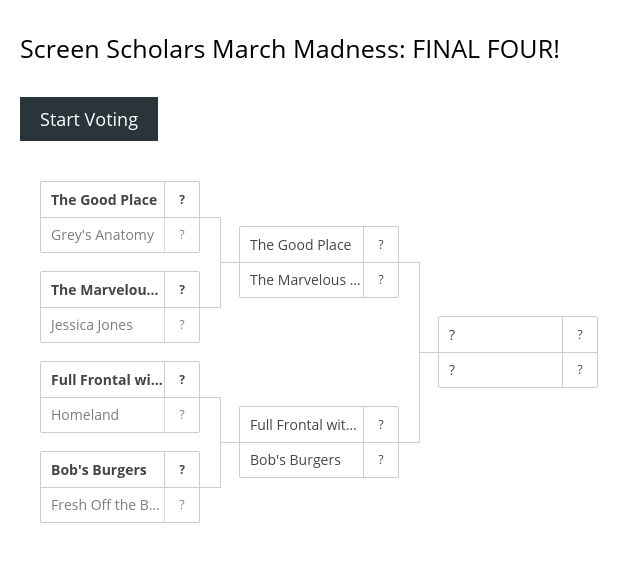