We’re back to the monsters of Late Night, which occasionally includes hot takes on culture, which we’ve affectionately dubbed Fake News. Now that we’re into the semi-finals, we’re fine with admitting that the line is blurry.

…Soundly defeated stalwart clip-lover The Daily Show with Trevor Noah. It’s hard not to be proud of Joel, seeing has his new, Netflix version of The Soup has a total of four episodes. Here’s the comedian at work:

But can he take on another winner, another stalwart?

…is currently in Puerto Rico. Why? Because Sam Bee doesn’t fuck around. (The editorial team is for hire, Sam, and we don’t fuck around either.) Samantha Bee is a force to be reckoned with. This might not even be a fair fight.

And in Late Night, voters have voted in…

There were zero votes for his alma mater and competitor, SNL. Meyers took Late Night when Jimmy Fallon moved into The Tonight Show, and brings his Weekend Update game to late night. He’s even eschewed doing his monologue standing, which somehow makes the bits seem more professional.

Unlike his lead-in, he’s willing to take on Trump. But can he take on…

The Rundown with Robin Thede

Thede is relatively new to the late night field, but that doesn’t mean she’s new. If anything, audiences deserve Robin Thede on over-the-air late night. 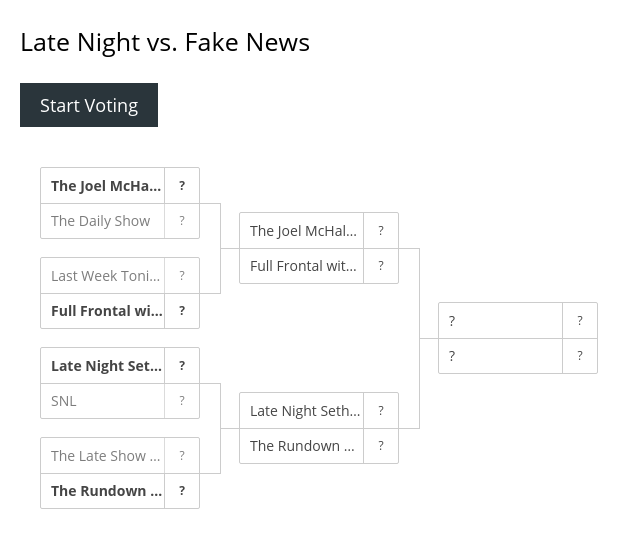 And if you haven’t yet voted in our first revealed set of second-round match-ups, circle back and click here.