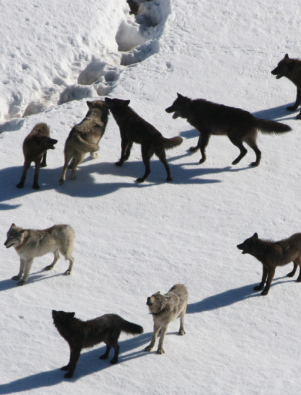 If you love circus sideshows, it’s a good time to be alive. However, if white supremacist conspiracy theories, fearmongering, and 1970s sitcom sidekicks having say in the next President don’t thrill you, you may want to grab a drink and turn the channel. In that case, we have yr other options right here:

NAVANI’S PICK:
Casual [Hulu]
Alex managed to break up his ex’s engagement to his business partner but now what? Yeah she might have been the one that got away but is this a good thing or is he secretly mortified as the commitphobe he really is?

KATHERINE’S PICK:
Yellowstone: Battle for Life [Animal Planet, 9p]
This one-hour special, edited from the BBC’s three-part Yellowstone series follows bison, wolves, and elk over the course of one year.

JASON’S PICK:
A Fistful of Dollars [TCM, 8p]
The way the RNC Convention has started this year, Clint Eastwood and his chair-centric monologue might be a welcome bit of sanity. Even better, TCM is airing his classic Man with No Name westerns directed by Sergio Leone. Stick around after for another helping in For A Few Dollars More.